Showcase of old and new, handmade and manufactured transform townhouse apartment with a boldly rationalised plan

Duinoord is a whole house refurbishment in the north-west of The Hague city centre. The area was laid out in the late 1800s on a former sand dune and is now a protected cityscape characterised by whimsical red brick and stucco neo-Renaissance buildings. Turrets, stepped gables, dormers, oriel windows, decorative columns and sculptural reliefs pepper the architecture. Constructed as part of this development, the Duinoord project house was previously split poorly into two apartments and was recently rebuilt after a fire.

Bláha’s first move was to rationalise the floorplan by reordering the apartments into two-storey upper and lower maisonettes. Duinoord occupies the ground and first floor where the emphasis has been on opening up the layout and bringing in lightness to accentuate the building’s restored historical features. The small kitchen now opens to the dining area, which opens to the living room at the front of the house through the ‘kamer en suite’ – the separating sliding doors and side cupboards structure often found in Dutch townhouses. New contrasts with old – the poured concrete floors in the dining area, kitchen and bathroom; the bespoke kitchen island and green hand-painted units. Walls are painted white, fireplaces are original, decorative ceiling work has been restored. The newly landscaped rear garden with its weathered steel-bordered flowerbeds filled with low-lying grasses, allium and high enclosing espalier trees is visible throughout.

Upstairs are three bedrooms. The master is divided by another kamer en suite from a spacious dressing area that opens onto another bedroom. On the landing, the WC is reduced to make a doorway to the turret room, which would have been part of the other apartment. The bathroom mixes high-end sanitary ware with low-budget IKEA cabinets to create a refined easy look. In Duinoord’s furnishing also, old sits next to new; handmade next to manufactured. The chandelier above the dining table is a composition of paper lanterns, the kitchen stools are from HAY, the funky mid-century living room armchairs were made by the owner’s grandfather.

‘Walls are painted white, fireplaces are original, decorative ceiling work has been restored.’ 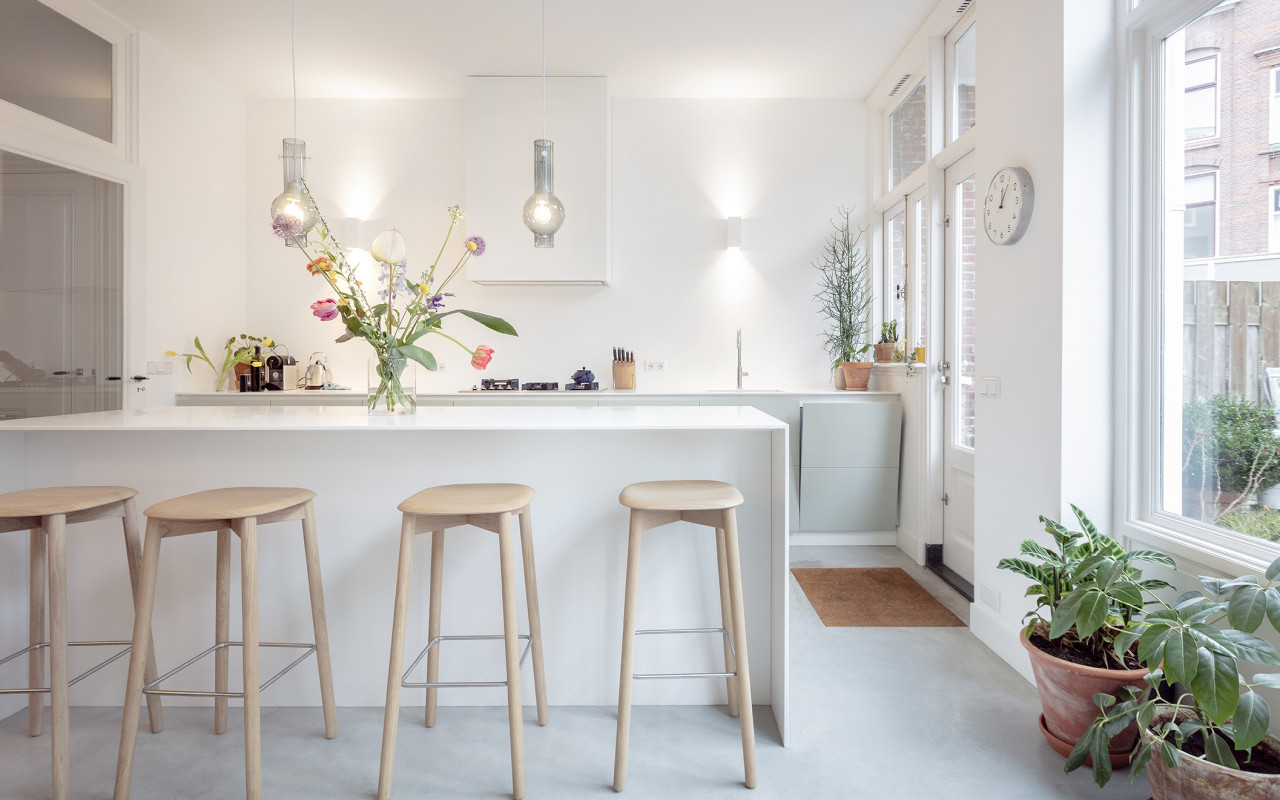 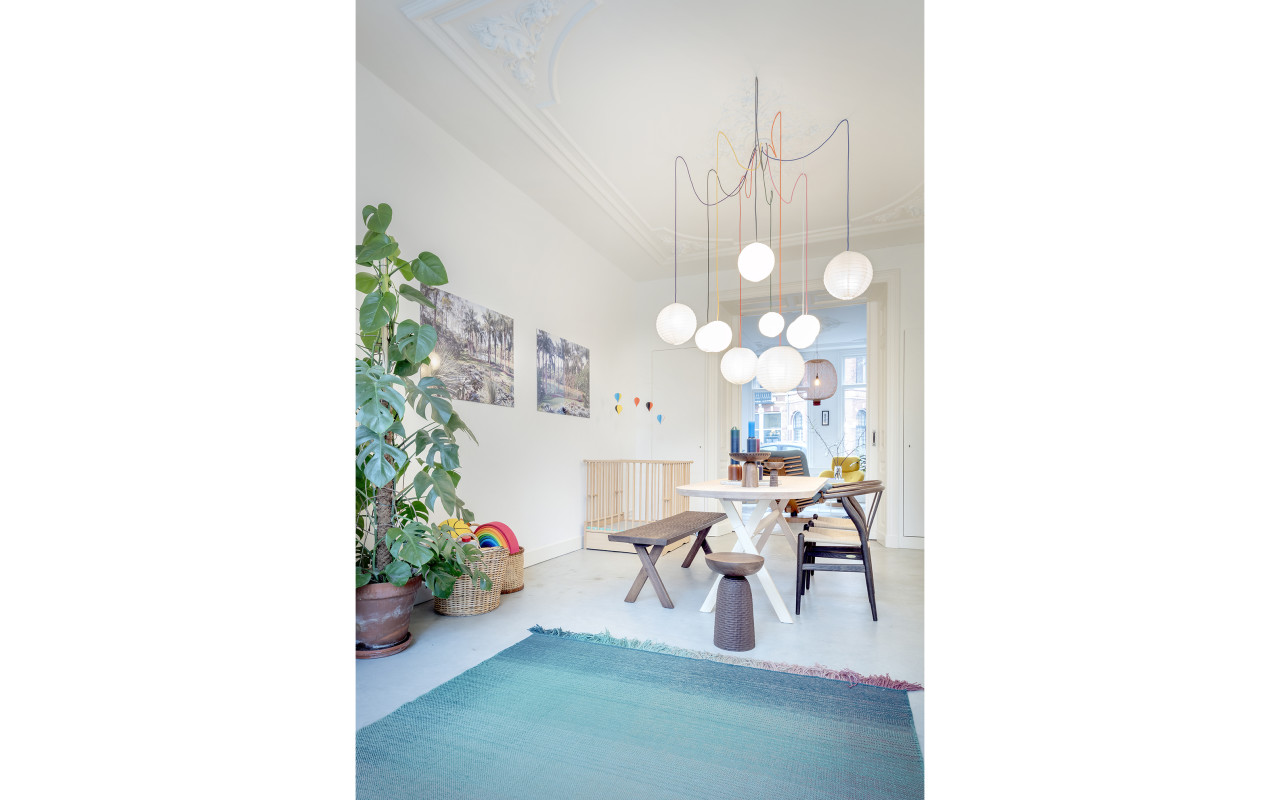 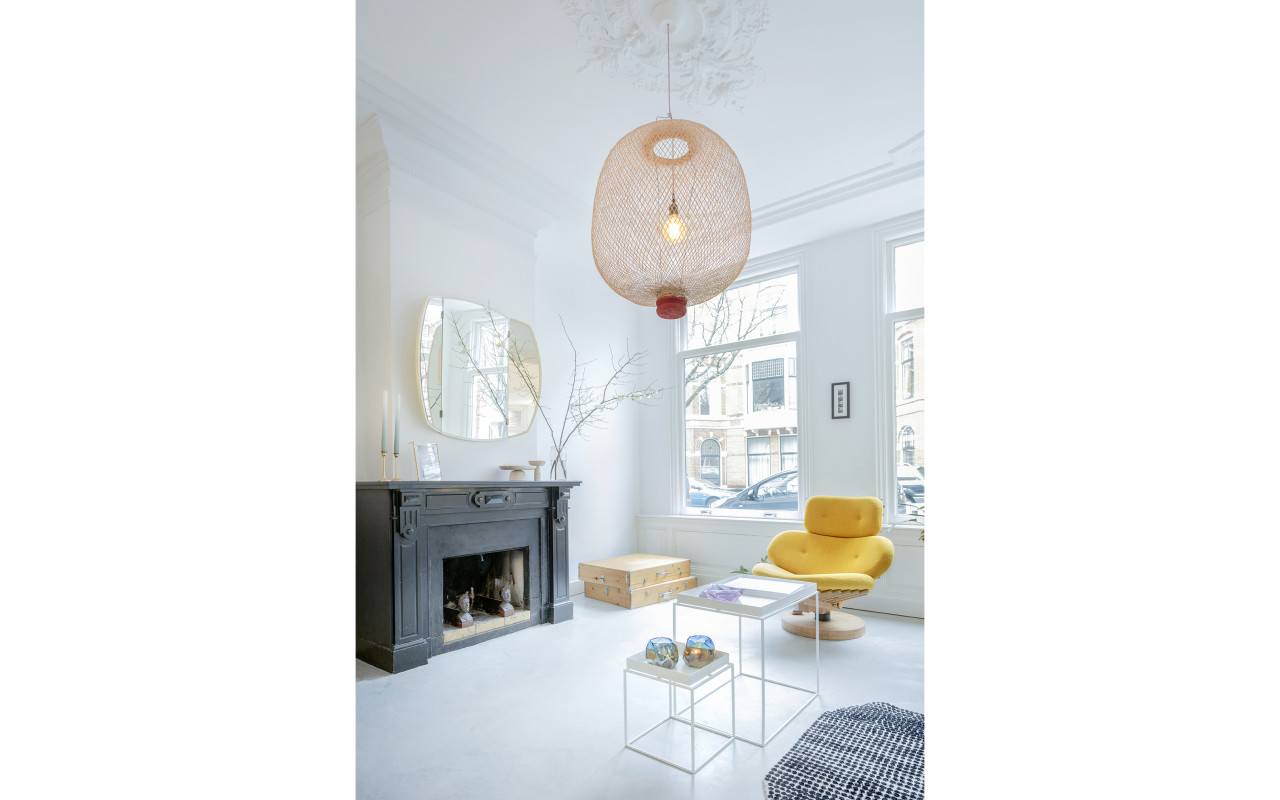 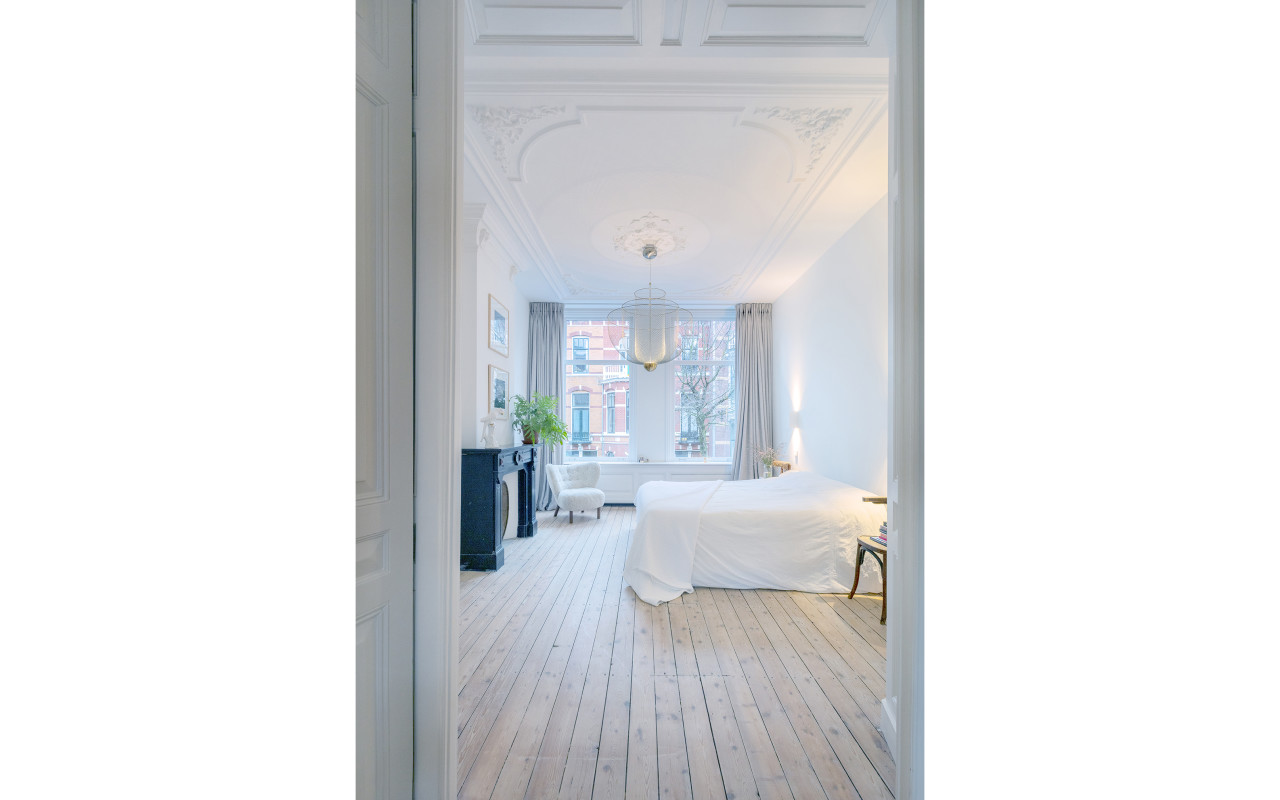 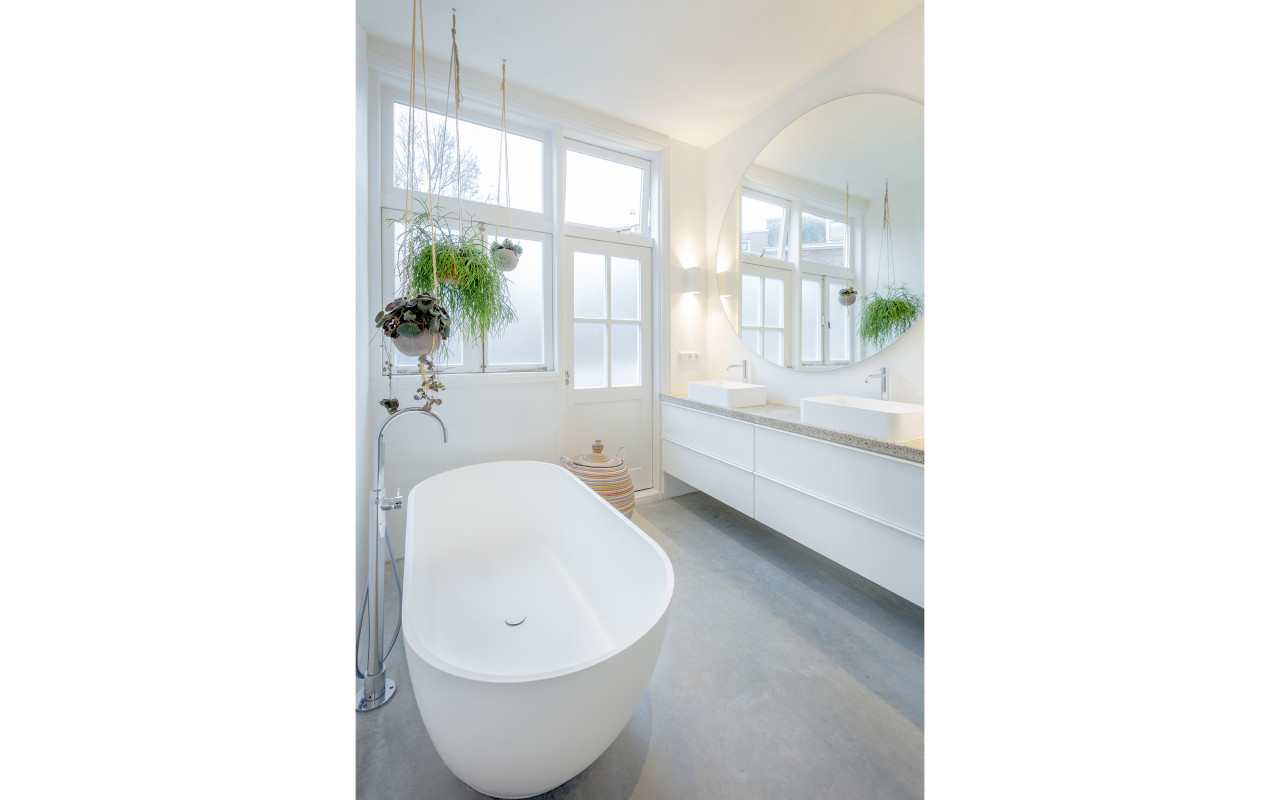 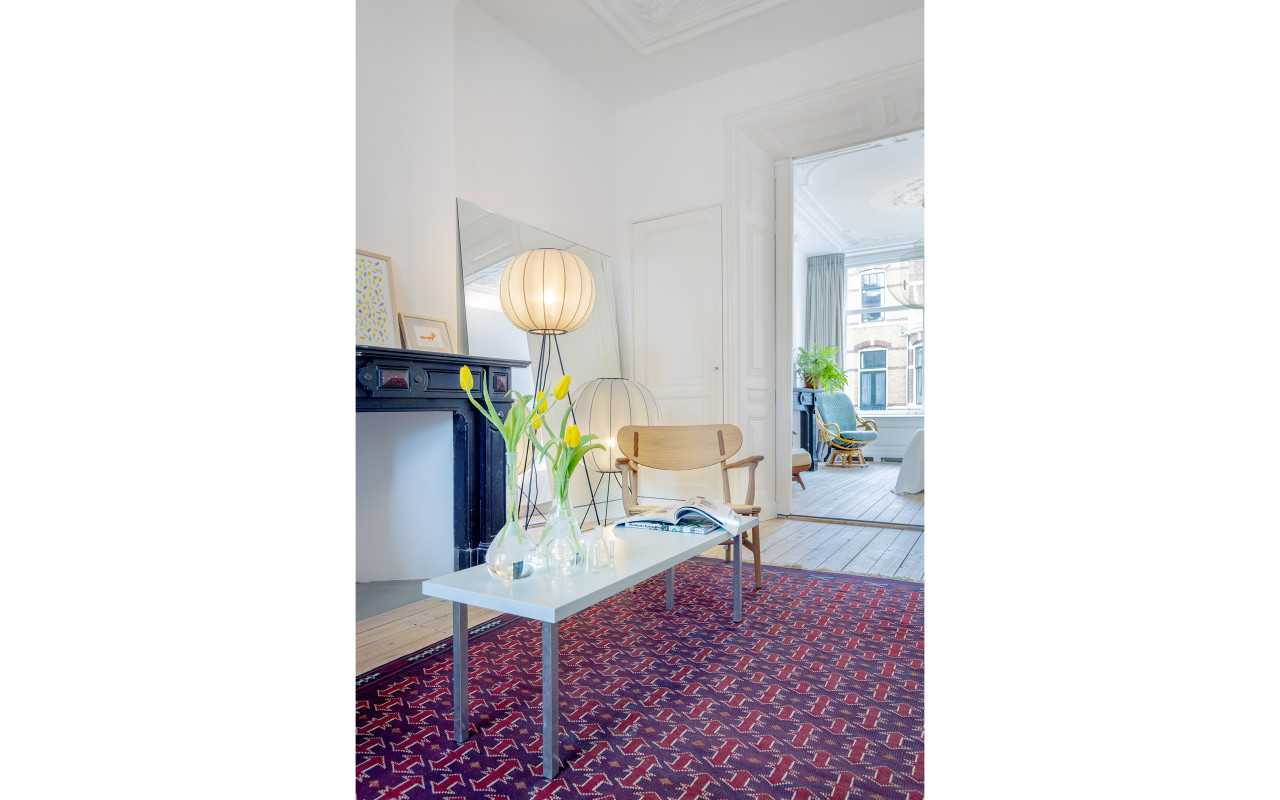 “The ornaments and woodwork provide the perfect contrast to the concrete floor. When I first visited, I thought to myself that you don’t often see a historic townhouse with a concrete floor. That’s why it was even more fun to do it.”
Annemieke Bláha, partner-in-charge, quoted in de Volkskrant, 22 March 2019 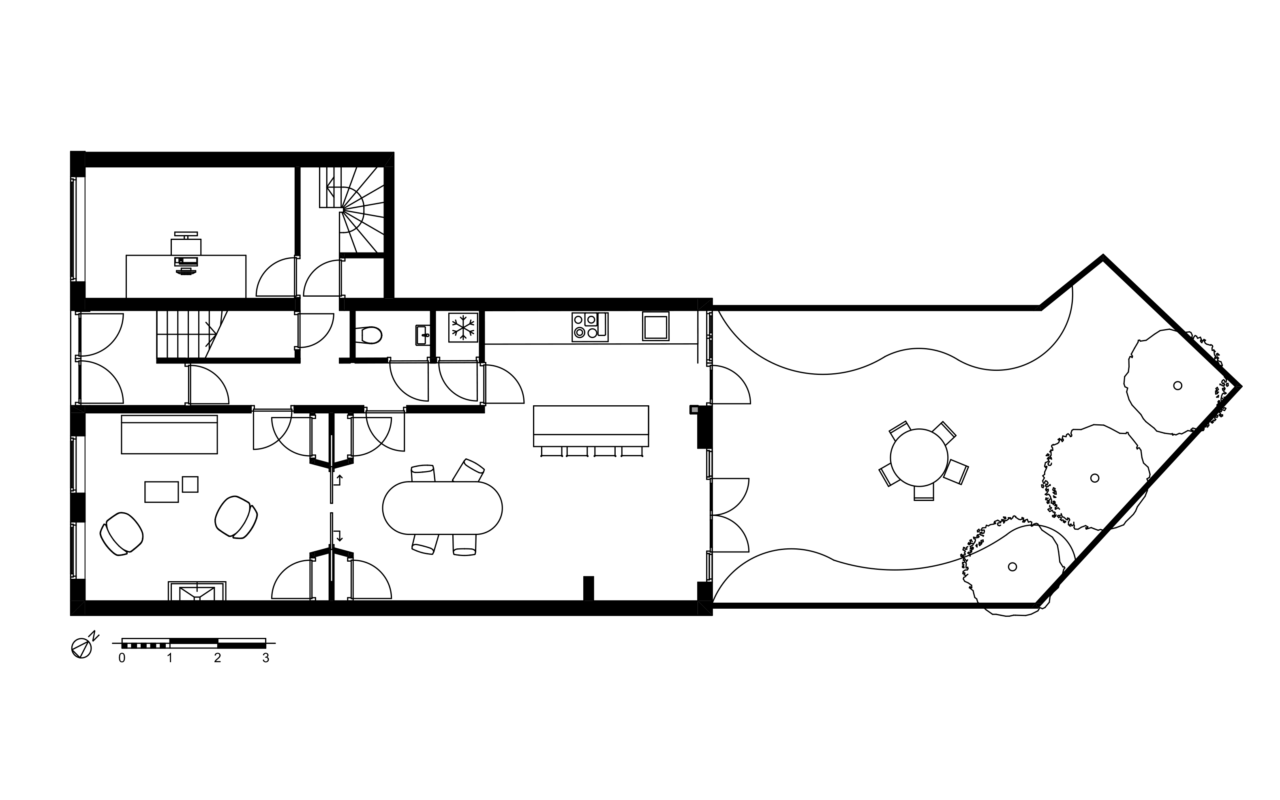 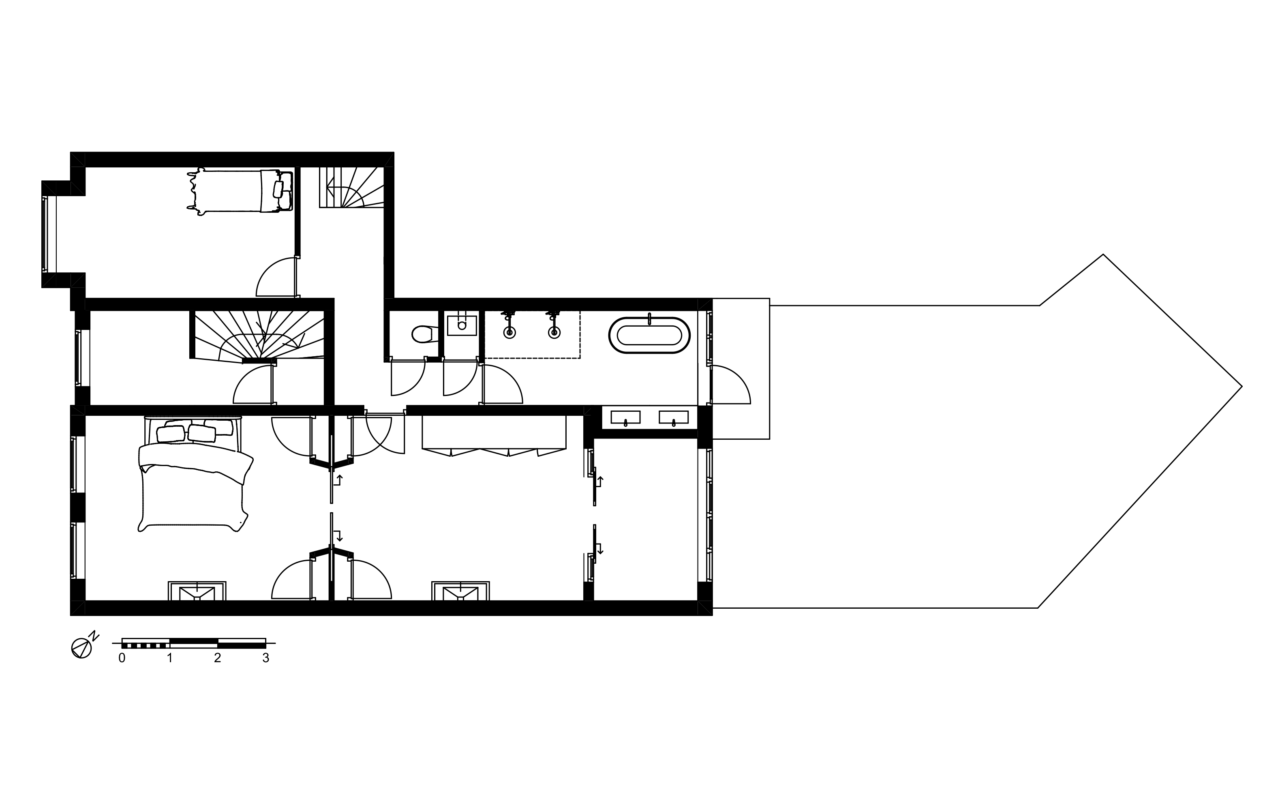